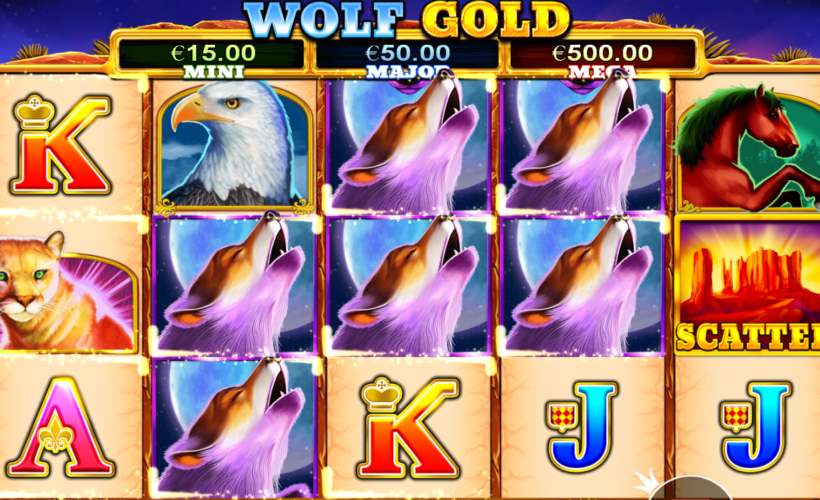 In the culture of North American Indians who were considered part of nature, wild animals occupied an honorable place. The wolf has always been one of the main totem animals since its appearance symbolizes strength, leadership and victory. Inspired by the legends about wolves, the staff of Pragmatic Play released a stunning online slot with a unique design and an impressive selection of original game options. If you like casino games with unexpected bonuses and different surprises then you should test Wolf Gold slot.

After a short load, the participant will move to a desert filled with wild animals. The screen is decorated with hot sand, beautiful sunset and evening sky. All these elements create the right atmosphere for a relaxed and profitable game. All elements were drawn in detail with all the requirements. Designers used different contrasts as well as shadow effects complemented by a light melody. All animals and bonus symbols appear on 5 reels and 25 paylines. All the pictures are interesting and original. Perhaps the developers have achieved this result thanks to 3D instruments that are often used in modern free online slots with no download.

Features and Bonuses of the Wolf Gold Slot Game

Wild (wolf) is depicted on all reels where it appears in long vertical stripes. As a rule, this element fills the entire column and theoretically can fill the entire screen. With the help of Wild, the player can replace the usual pictures and add the combinations in any round.

You will meet Scatter (sunset) only in the first, third and fifth columns where it gives payments and also starts the game with Free Spins. You will receive 5 free rounds during which the virtual casino makes a bet. Three medium reels are combined into a single “giant” joker that fills nine cells on the screen.

Bonus (moon) is the Money Symbol that appears in stripes on the playing field. With this picture players can get a jackpot in Money Respin. This is also a great opportunity to get additional re-spin with extra payouts. When the round is completed all the payments in the bonus images are summed up.

How to play Wolf Gold for Free with no download

Now you know that Wolf Gold is a modern and interesting online slot with a wide range of bonus options and symbols. Before you make the first spin and win real money, we should examine the control panel located under the playing field.

Click “і” to open a section with theoretical information. On these pages, the developers told about all the rules, symbols and their coefficients. After that, you can return to the main screen and select bet per spin. Gamblers perform this action with the large “+” and “-” buttons on the right side. Nearby you will find a button with round arrows that starts manual rotations. As always, the Pragmatic Play slot offers an Autoplay feature.

Summing up, we can list the benefits of Wolf Gold again. The game became popular thanks to an interesting plot, a generous bonus system and simple rules. As a result, we can recommend it to all players who want to win real money as quickly as possible.